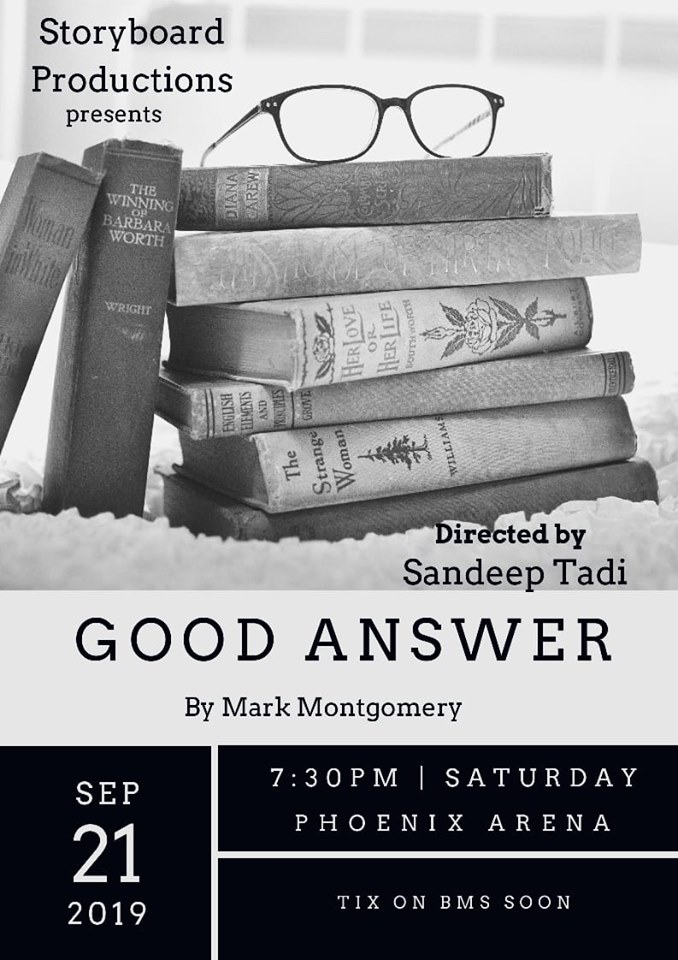 Storyboard Productions is back again with it's rib-tickling comedy Good Answer by Mark Montgomery: D Remember the date 21st September, 2019 and time 7:30 PM at Phoenix Arena - An Art & Cultural Center :) Synopsis: Good Answer depicts one very unpleasant morning In the life of Michael Kaminski, a mathematics professor at a small Iowa college who is currently serving as its acting president. He would like to get the word "Acting" removed from his job title. The maintenance union is furious over Michael's threatened layoffs, student environmentalists are organizing a rally to denounce him. Not to mention that his own administrative assistant is implacably hostile. Further, the college is in severe financial trouble. To save his own job, and many others, Michael needs to prize a desperately-needed donation from a wealthy alumnus who is scheduled to arrive on campus. But, many of the college constituencies against against this. Beneath some mildly farcical plot elements, the play confronts serious questions of how society defines success and failure. More importantly, how all of us must define those things for ourselves. Michael's misadventures force him into a long-overdue assessment of his abilities, his ambitions, and his relationships with family members (both living and dead). Cast: Jonas David - Michael Kaminski Shreya Ballal - Jo Ann Aneesha Dama - Margaret Harsh Garg - Butchie Jayanth Nandagiri - David Ananth Vikram - Phillip Tickets on Book My Show :)

About Organiser: Storyboard Productions is coming up with their sixth production Thirst by Eugene O'Neill. They started theatre with a successful Charley's Aunt in 2018 and came up with four more plays Friedrich Dürrenmatt's The Physicists, Mark Montgomery's Good Answer, Tanikella Bharani's Jambu Dweepam, and Mohan Rakeshs' Ande Ke Chilke.